John Smith writes a "tell all" book about Jamestown. 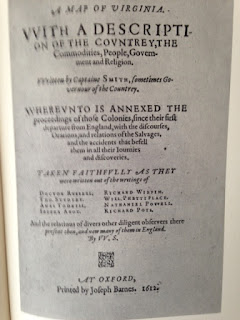 To begin, John Smith put together a small book called A Map of Virginia. Friends and comrades who had been in Virginia with him and who had seen what happened there after he left wrote part of it, and, as Smith’s biographer and editor, Philip Barbour, said, “Together they wrote the book telling their side of the story, and apparently against the wishes of the Virginia Company together they got it printed in Oxford. . . .” There was nothing the Virginia Company could do about it.
One of the most important books about Virginia ever printed, it contains, as the title promises, a historic map, with Smith’s incomparable description of “the Country, the Commodities, People, Government, and Religion.” But it also contains a narrative of the “Proceedings” of the colony from the voyage of the Susan Constant, the Godspeed, and the Discovery in 1606 to the death of Sir George Somers in Bermuda in 1609. Here, for all of England to read, were firsthand accounts of the explorations, the confrontations with the Indians, the diseases and disasters, and the Starving Time with all its horrors. George Percy, newly returned from Virginia in the fall of 1612, must have been furious. He did not produce his narrative until 1625, and it was not published in his lifetime. A Map of Virginia made another account superfluous.

In 1624, John Smith would publish his masterpiece, The General History of Virginia.

How truthful was John Smith?


Posted by Virginia Bernhard at 8:02 AM No comments:

Francis’s brother Thomas West, Lord de La Warr, was scheduled to sail soon with a massive relief expedition for the beleaguered Virginia colony: over a thousand colonists and ample supplies for them and the survivors at Jamestown. But he would be sailing without Captain John Smith, whose gunpowder wound would keep him out of commission for as much as a year. Even now, after four months, theslightest exertion exhausted him; the smallest movement of his right leg pained him. For the time being, at least, Smith knew that he would have to be relegated to another, lesser role in the affairs of the colony so dear to his heart.
“What will you do now?” Sir Thomas asked as the two sipped their liquor. Smith studied the liquid in his cup.
“I don’t know,” he said.
“No man in England knows more about Virginia than you do,” Sir Thomas said. “Why don’t you write something? God knows, the Company needs all the help it can get. A book with the truth set down would be very useful indeed.” 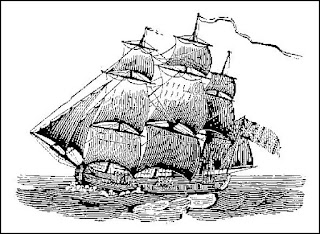 Posted by Virginia Bernhard at 7:28 AM No comments:

And so, for the next hour, John Smith told Thomas Smythe of what had transpired in Virginia, of the discord and factions, of the troubles with the Indians, of the plots against his life.
“I have read Archer’s and Ratcliﬀe’s letters,” Sir Thomas said, tapping his ﬁngers thoughtfully on the polished surface of the table in front of him. “Archer says you sided with the sailors and refused to surrender your commission as president; Ratcliffe says you were high-handed, and—how did he put it? You ‘were sent home to answer some misdemeanors.’ ” From the tone of voice, Smith could not tell what his host was thinking.
Suddenly, Sir Thomas looked up and smiled. “And I say Archer’s a rumormonger and Ratcliffe’s a bastard. Have some aqua vitae.”
Relief, like a warm, welcome bath, washed over John Smith. His frail, ravaged body straightened slightly; his awful wound felt as if someone had spread a healing balm over it. He was not, then, out of favor with the Virginia Company Council. He knew he was not at fault; he had followed his own best judgment and had written in his own defense, but he was, after all, only the son of a yeoman farmer in Willoughby, Lincolnshire, and the men he dealt with were the sons of old, distinguished families. Francis West and his brother Thomas, Virginia’s future governor, were ﬁrst cousins twice removed to the late Queen of England, and John Smith had made an implacable enemy of Francis West.

from Jamestown: The Novel 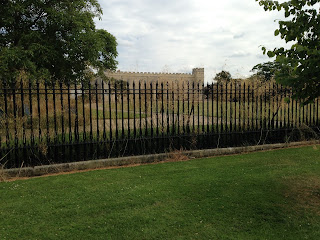 Ah, Captain Smith! How are you?” Sir Thomas strode into the hall, his wine-colored velvet robe sweeping behind him.
“Not so well as I’d like, or as I’d hoped to be by now,” Smith said. He planned to proceed cautiously, not knowing what conﬂicting reports had reached the man who stood smiling before him. Thomas Smythe, treasurer of the Virginia Company, member of the Haberdashers’ and Skinners’ Companies, the Levant Company, and at one time governor of the Muscovy Company, was also a member of one of the richest merchant families in all of England. His elegant house in Philpot Lane, not far from the tall spires of the Church of St. Margaret’s Pattens, had become the headquarters of the Virginia Company. It was here that the Company’s broadsides instructed all interested “workmen of whatever craft they may be, blacksmiths, carpenters, coopers, shipwrights, turners and such as know how to plant vineyards, hunters, ﬁshermen, and all who work in any kind of metal, men who make bricks, architects, bak- ers, weavers, shoemakers, sawyers and those who spin wool and all others, men as well as women, who have any occupation, who wish to go out” to Virginia, to come and have their names entered on the list and receive in- structions about their work for the Company and their eventual share in the division of land. Those who did not wish to go to Virginia themselves could buy a share of the joint-stock issue for twelve pounds sterling. Then, as the Virginia Company fervently hoped, the new colony’s future earnings would provide them all with handsome proﬁts.
“Come into the library,” Sir Thomas said. When he and Smith were inside, he closed the large double doors carefully and turned the brass lock. “Now,” he said, “we can talk undisturbed—and not be overheard. I have read your letter, but I want to hear what happened in your own words.”

Posted by Virginia Bernhard at 7:12 AM No comments:

An excerpt from JAMESTOWN: THE NOVEL:

As the carriage turned into Fenchurch Street, the snow, which had been drifting down a few desultory ﬂakes at a time, began to fall in earnest, and the driver could hardly see his way. Inside the carriage, a pale-looking man swathed in a heavy woolen cloak shivered and peered out at the swirling snowﬂakes. He did not relish the visit he was about to pay, but it had to be done.
“Philpot Lane!” the driver called out, and under his hands the pair of matched chestnut geldings reluctantly slowed their pace. Beside him, a footman in green and gold livery swung down from his seat and called out to the passenger.
“Here you are, sir! This house right here’s the one you want.  Sir Thomas Smythe’s.”
“I know,” said the passenger, without much enthusiasm. Seizing his cane, he descended slowly and awkwardly from the carriage. His right side still pained him, and he walked upright with great difficuly. He was grateful to the Earl of Hertford for lending him his carriage. Lifting the ornate brass knocker, he let it fall sharply on the heavy oak panel of the door. Almost instantly, the door swung open and a serving man ushered him inside.
“Are you expected, sire?”

“Whom shall I say is calling?”

“Very good, sire. I shall tell Sir Thomas that you are here. He has been expecting you.”
If Smith’s side had not been so painful, he would have paced up and down the richly ﬁgured Turkey carpet in Sir Thomas Smythe’s entrance hall. Instead, he stood still, leaning on his cane and waiting. Under his trunk hose on his right side was a bandage, and under that was a patch of oozing raw ﬂesh the size of a man’s two hands. His gunpowder burn had begun to fester in the ten weeks he had spent at sea, and now the skin refused to grow back over the wound. Until a few days ago, he had been unable to bear anything touching it, and since his return from Virginia in December he had been a half-naked invalid at the country house of his friend, Edward Seymour, the Earl of Hertford. But after the Virginia Company had convened for its Hilary Term meeting on January 15, Smith knew that he must make an effort, pain or no, to see Sir Thomas, the Company’s treasurer, and explain to him in person what had happened in Virginia. . . .

Posted by Virginia Bernhard at 11:53 AM No comments: