In December 1607 John Smith went exploring up the Chickahominy River. He hoped to trade beads and trinkets to the Indians for food, but instead the Indians killed three of his men. One of them, a carpenter named Thomas Emry, was taken by surprise and never heard of again. Emry’s companion, John Robinson, died with “20 or 30 arrows in him.” The third man, George Cassen, suffered a hideous death by torture at the hands of Indians who were looking for Smith: They stripped Cassen naked, tied him to a tree, and with mussel shells or reeds they cut off his fingers one after the other, scraped the skin from his head and face, and finally disemboweled him. Then they burned him “with the tree and all.” 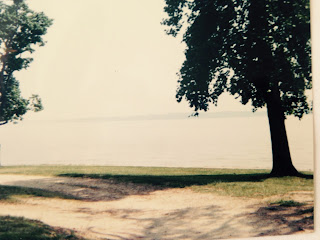 Meanwhile, Indians had captured Smith. He managed to hold his own among them, including the king of the Pamunkey Indians, a tall Indian named Opechancanough. His brother was Wahunsonacock, also called Powhatan, the chief of all the Chesapeake tribes. Taken for an audience before Powhatan, Smith narrowly escaped being bludgeoned to death.
This was the now-famous rescue, when Powhatan’s daughter Pocahontas saved Smith’s life.

We know the Pocahontas story--but only from John Smith.
Posted by Virginia Bernhard at 10:05 AM No comments:

Another of Smith’s enemies becomes head of the council

Hunger and hostile Indians were not the only troubles at Jamestown in those early months of settlement:
Councilor George Kendall was tried and executed for “a mutiny.” (Suspicions that Kendall was a spy for Spain may have had something to do with it.)
One of the boys ran away to the Indians.
A young man in his late teens or early twenties died of a gunshot wound to his leg. Who shot him, and why? No one knows. His name was not recorded, and neither was the date of his death, but his grave has recently been discovered. So far the skeletal remains in it are known only as JR [Jamestown Recovery] 102C.
On September 10, 1607, Edward Wingfield, who had been plotting to sail for England, was deposed as president. John Ratcliffe, one of Smith’s enemies, was elected president John Ratcliffe, the councilor who became president, is another Jamestown mystery. His English background is unknown. He invested £50 in the Virginia Company, and when he was in Virginia he called himself Ratcliffe. But sometimes he used the name Sicklemore.  George Kendall, before he was executed and hoping to save himself, declared that Ratcliffe’s real name was Sicklemore, not Ratcliffe, and thus as President Ratcliffe he could not pronounce the sentence of execution. But Ratcliffe did, and Kendall died. John Smith described Ratcliffe as “now called Sicklemore, a poor counterfeited imposture.”

That may have been because Ratcliffe and others tried to hang Smith a few months later.

Posted by Virginia Bernhard at 9:42 AM No comments:

Inside the fort, “extreame weaknes and sicknes”

Outside the fort were Indians, and inside, disease and death. John Smith would write later, “Within tenne daies scarse ten amongst us coulde either goe, or well stand, such extreame weaknes and sicknes oppressed us.” Worse yet, there was not enough to eat. As a 20th century historian wrote, “Gone were the meat and ale to which husky Elizabethan appetites were accustomed; daily rations now consisted of half a pint of wheat as little of barley, both wormy from months at sea.” Such a diet would be approximately 600 calories. This was the Starving Time, Part I.
From August 6 to September 5, twenty-one men died, sometimes two and three a day. As George Percy remembered, “Our men were destroyed with cruell diseases as Swellings, Flixes, Burning Fevers . . . but for the most part they died of meere famine.” One of them was councilor Bartholomew Gosnold, the captain of the Godspeed, who left a wife and three small children at home in Bury St. Edmonds. As befitted an officer and a gentleman, he was buried with full military honors.
Edward Wingfield, the colony’s first president, allegedly hoarded food and refused to share the company’s liquor supply (aqua vitae and sack). He lasted only four months in office. There were bitter quarrels, and Smith wrote mysteriously that he himself was “disgrac’d through others’ malice.”

Smith wrote the history of Virginia, but he left out a lot.

[i] Percy, “Observations gathered out of a discourse of the plantation of the southern colony in Virginia by the English, 1606, Written by that honorable gentleman, Master George Percy,” in Horn, ed., Captain John Smith, 933.
Posted by Virginia Bernhard at 7:53 AM No comments:

At Jamestown, an unseen enemy

From the start, Virginia’s hardships made harsh words inevitable: There was back-breaking, hand-blistering labor to do, and at least half of the work force were gentlemen unaccustomed to, not to mention unskilled at, manual labor. First, they had to find a suitable place to settle: Sailing more than forty miles up the wide river that they named the James after King James I, they chose a small, wooded peninsula about two miles long and a mile to a mile and a half wide. It was actually an island, separated from the mainland by a shallow creek, but the James River here was six fathoms [36 feet], deep enough to moor their ships a stone’s throw from the shore. Good for ships, but bad for humans: they failed to notice that much of the island was a swamp, and the water they drank was brackish.

By June 15, seven weeks after they arrived, 104 men and boys (one man had died on the voyage) had built a fort. Working and sweating (and no doubt, swearing) in the hot Virginia sun, they dug over 1,600 feet of trenches nearly three feet deep to form a huge triangle by the river’s edge. They chopped down hundreds of pine and oak and elm trees. They dragged heavy logs of up to one foot in diameter, one by one, to set vertically in the trenches to make a palisade with walls eleven to fifteen feet high.
When it was finished, the fort covered about an acre and a half, or roughly the area of two football fields. It was a triangle 140 yards long on the side facing the river, and 100 yards on each of the other two sides. With guns mounted at each angle and only one entrance, a massive log gate on the side facing the river, this palisaded fort would be a comforting defense against invaders—either Indian or Spanish.

But log walls could not keep out another enemy: disease.
Posted by Virginia Bernhard at 8:13 AM No comments: