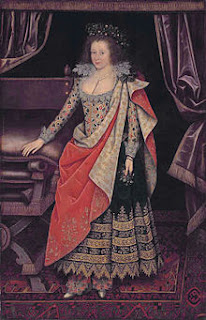 Portrait of Lady Frances, Countess of Hertford, in 1611.

How well did she know John Smith?

Her husband, Edward Seymour, Earl of Hertford, was Smith’s “best friend.” The Earl died at age 81 on April 6, 1621. Lady Frances was then 43 years old. John Smith was 41. A wealthy widow, Frances nonetheless wasted no time in attaching herself to a new husband:  Just two months after Edward died, Frances married a 47-year-old Scottish nobleman, Ludovic Stewart, 2nd Duke of Lennox. He was a cousin of King James I. A member of the Privy Council, he was also Steward of the Royal Household. Steward became Earl of Newcastle upon Tyne and Duke of Richmond on August 17, 1623, but did not enjoy those titles very long. He died at age 50 in his bed (of a heart attack?) at Whitehall on the morning of February 16, 1624. As his widow, Lady Frances, now wealthier than ever, became known as the “Double Duchess.”

On July 12, 1624 John Smith’s monumental Generall Historie of Virginia, New-England and the Summer Isles was published. It was dedicated To the Illustrious and Most Noble Princesse, the Lady Francis, Duchesse of Richmond and Lenox. A  1623 engraving of her image was bound into the original edition.

Posted by Virginia Bernhard at 8:16 AM No comments: