After the assassination attempt, Smith’s allies, his “old soldiers,” the men who had been with him in his expeditions all over the Chesapeake, wanted revenge. They begged him to let them get rid of his enemies, “to take their heads that would resist his command.” But John Smith had had enough. He was desperately weak and in excruciating pain from his burns. Most people—and perhaps Smith himself—did not expect that he would live. And so, as he and his co-authors wrote afterward, Smith’s time in Virginia had come to a sad end: “his commission [as president] to be suppressed he knew not why, himselfe and souldiers to be rewarded he knew not how, and a new commission graunted they knew not to whom . . . .so grievous were his wounds, and so cruell his torment, few expected he could live, nor was hee able to follow his businesse to regaine what they had lost, suppresse those factions and range the countries for provision as he intended, and well he knew in those affaires his owne actions and presence was as requisite as his directions, which now could not be.”

--Virginia Bernhard, A TALE OF TWO COLONIES: WHAT REALLY HAPPENED IN VIRGINIA AND BERMUDA?

In October 1609, John Smith sailed for England. He would never return to Virginia. 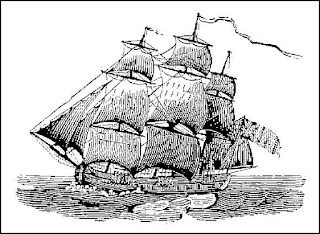 Posted by Virginia Bernhard at 8:29 AM No comments:

On that September afternoon when Smith’s barge came into view on the river, people at Jamestown were shocked at what they saw—or rather, what they did not see. Smith was always at the bow shouting orders when his barge came in. This time he was not there. As soon as the mooring was made fast, the reason for his absence at the bow was clear: He was “unable to stand, and neere bereft of his senses by reason of his torment.” Smith’s sailors were preparing to carry their gravely wounded leader ashore on a makeshift litter. After the gunpowder accident his men had brought him downriver as quickly as they could, but by now his untreated burns were hideously blistered and blackened. They oozed. Flies and gnats swarmed around them.
People who saw John Smith lying helpless and crazed with pain, shook their heads.
What would become of Jamestown now?
Smith’s enemies, John Ratcliffe, Gabriel Archer, and John Martin, seeing him “near bereft of his senses,” were disappointed to see him still alive. Soon they and their confederates “plotted to have him murdered in his bed.” 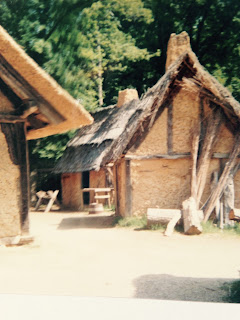 The story is not altogether clear, but it is mentioned in two of the existing sources: “The Proceedings of the English Colonie in Virginia,” published in 1612, and Smith’s own Generall Historie of Virginia, New England, and the Summer Isles, published in 1624. But about the attempted assassination of the wounded John Smith, the wording in both the “Proceedings” and the Generall Historie is identical and frustratingly brief: “But his hart did fail him that should have given fire to that mercilesse pistol.”
So, apparently did the pistol, which did not go off.
Did Smith, feverish and wracked with pain, hear the click of a pistol being cocked and know at the time that someone had tried to kill him, or did he learn about it afterward?
No one knows.

Posted by Virginia Bernhard at 7:31 AM No comments:

“John Smith may not live to fight again.”

John Smith had been hideously wounded in the accident upriver. The Indians, who watched and knew everything that happened along the river, had seen what happened. Wahunsonacock, the father of Pocahontas and the ruler of the Powhatan people discussed it with his brothers. He had developed a grudging admiration for his enemy.

Had Pocahontas not flung herself at John Smith, Wahunsonacock might have adopted him into the tribe. But Pocahontas had to be disciplined, and her father told himself he did not want his daughter sleeping with a foreigner.
“He has the courage of a hawk, but he is badly wounded. I saw the fire aboard his ship myself, and I saw how it burned him as he leaped into the river. His clothes were all in flames. When his men pulled him out of the water, he was very near death. They said it was his gunpowder bag that caught fire.” Wahunsonacock inhaled the fragrant smoke from his tobacco leaf, exhaled, and squinted at his brothers through a fine blue haze. “I say Francis West tried to kill him.”
“Why?”
“Smith made him stay at the Falls. They had hot words. West said he wanted to go back to England and Smith said he could not.”
Opechancanough smiled. “If these English begin to quarrel among themselves, they may kill each other and save us the trouble.”....
But Wahunsonacock, whose heart ached for his banished daughter and who wished that John Smith could have been his son, not his enemy, was silent. 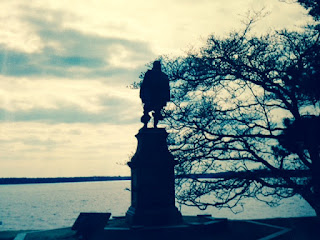 Posted by Virginia Bernhard at 7:28 AM No comments:

After 400 years, the U.S. government has extended recognition to the Pamunkey Indians of Virginia.

They join more than 300 other tribes so recognized. About time! Pocahontas and her father would be glad.
Posted by Virginia Bernhard at 10:26 AM No comments:

We can celebrate this holiday because of what John Smith and others began at Jamestown 400 years ago. 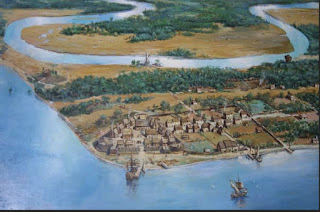 Posted by Virginia Bernhard at 7:17 AM No comments: