Having a hot summer?
Think of the English at Jamestown, summer 1607:

There was back-breaking, hand-blistering labor to do as soon as they had picked a place—marshy and unhealthy, as it turned out--to settle. Sailing more than thirty miles up the wide river that they named the James after King James I, they chose a small, wooded peninsula about two miles long and a mile to a mile and a half wide. It was actually an island, separated from the mainland by a shallow creek, but the James River was six fathoms [36 feet], deep enough to moor their ships a stone’s throw from the shore.
By June 15, seven weeks after they arrived, 104 men and boys (one man had died on the voyage) had finished an enormous task: They had built a fort at the site they called Jamestown. Working and sweating in the hot Virginia sun, they dug over 1,600 feet of trenches nearly three feet deep to form a huge triangle by the river’s edge. They chopped down hundreds of pine and oak and elm trees. They dragged heavy logs of up to one foot in diameter, one by one, to set vertically in the trenches to make a palisade with walls eleven to fifteen feet high. When it was finished, the fort by the river covered about an acre and a half, or roughly the area of two football fields. It was 140 yards long on the side facing the river, and 100 yards on each of the other two sides. With guns mounted at each angle and only one entrance, a massive log gate on the side facing the river, this palisaded fort would be a comforting defense against invaders—either Indian or Spanish. 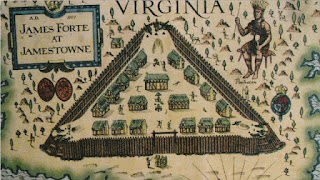 Invaders would be the least of their worries.

Posted by Virginia Bernhard at 8:06 AM 5 comments:

More later.
Posted by Virginia Bernhard at 7:37 AM No comments: