...into the Bay of Chissiapiacke. . , . .
So wrote John Smith over 400 years ago, describing the arrival of the Susan Constant, Godspeed, and Discovery in Virginia’s waters. We can forgive him for spelling “Chesapeake” in this odd way. In 1606 almost no Englishmen had ever heard of such a name. It was an Algonquin Indian word meaning “land along the big river.” English settlers and Indian natives would soon make a grim history in that land.

Revenant is a novel about survival.

Jamestown: The Novel is about the survival of a colony. 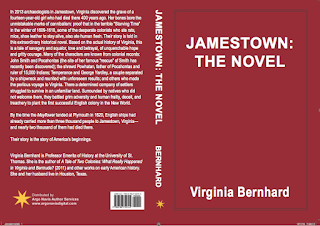 Posted by Virginia Bernhard at 7:48 AM No comments: 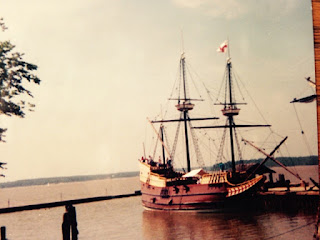 The Susan Constant replica at Jamestown, Virginia.
Worth a trip to see, along with everything else there.

The Susan Constant was the flagship of the historic voyage to Virginia in 1607.

Posted by Virginia Bernhard at 8:03 AM No comments:

For Valentine's Day: The ""Love Dance," John Smith, and Pocahontas

Then the ceremony began: “thirtie young women came naked out of the woods, onely covered behind and before with a few green leaves, their bodies all painted, some of one colour, some of another, but all differing, their leader had a fayre payre of Bucks hornes on her head, and an Otters skinne at her girdle, and another at her arme, a quiver of arrowes at her backe, a bow and arrowes in her hand; the next had in her hand a sword, another a club, another a pot-sticke . . . .”
Thus adorned with paint of various colors usually reserved for men (red was a woman’s color, but men on occasion wore blue, black, and yellow as well as red) and armed in a mimicry of gender roles, from men’s hunting (the otter skins, bows and arrows) and warfare (the sword and club) to women’s cooking (the pot-stick), these young women  “cast themselves in a ring about the fire, singing and dauncing . . . .” After the dance, which lasted “near an hour,” was done, the young women invited Smith to their lodging, where, as he tells it, “all these Nymphes more tormented him then ever, crowding, pressing, and hanging about him, most tediously crying, Love you not me? love you not me?” Then there was a feast with more singing and dancing, and afterward, “with fire brands in stead of Torches they conducted him to his lodging.”
With this tantalizing conclusion, Smith leaves us to wonder what happened next. Where was Pocahontas? Smith’s earlier use of the phrase “Pocahontas and her women” could mean that Pocahontas was among the dancers. Were the other young women some of Powhatan’s many wives? Were Smith’s English companions also given this special treatment? And the most important question of all: in the absence of Powhatan, did Pocahontas and the other young women stage this ceremony for their own amusement?


If these young women designed their dance to flaunt their femininity before the Englishmen and to mock masculine prowess in hunting and fighting--the principal activities of Indian males--then this ceremony suggests not only Indian women’s awareness of the importance of gender roles, but a shrewd and subtle humor in the use of them. If Pocahontas had an adolescent crush on John Smith, she may have contrived to entertain him thus, and perhaps to flaunt her sexuality before him, without the constraints of her father’s presence.  Whatever the nature of their relationship, it was very close, and on one occasion Pocahontas risked her life to warn Smith and his men of a planned surprise attack on them by her father.

--an excerpt from Virginia Bernhard, “Pocahontas Was Not the Only One: Indian Women and Their English Liaisons in Seventeenth-Century Virginia,” in Searching for Their Places: Women in the South Across Four Centuries, Thomas W. Appleton, Jr., and Angela Boswell, eds. (Columbia and London: University of Missouri Press, 2003).

Posted by Virginia Bernhard at 7:57 AM No comments:

This statue of Pocahontas is at Jamestown, and a replica of it is in England at St. George’s, where she died. 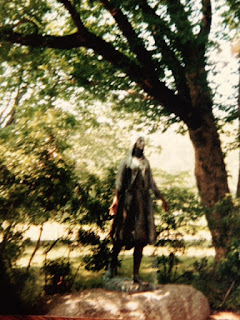 More on Pocahontas from JAMESTOWN: THE NOVEL:

“And Thomas?” Temperance said after a pause. “Where is he?”
“I left him in England,” Rolfe said sadly. “At the time, I thought Virginia would be no place for a two-year-old with no mother, so I sent Matachanna and Tomocomo to take him to my cousin in London.” He sighed. “I also thought that if I brought him back here, Powhatan might want him raised as an Indian, and there might be trouble. So I left him, but I already wish I had kept him with me,” he said ruefully.

Without Pocahontas and her charming ways, Indian-English relations in early Virginia might have been disastrous. Her marriage to the Virginia colonist John Rolfe (along with her conversion to Christianity) was a cultural triumph. She was not a princess, but when she visited London, she fascinated the English, who treated her like a celebrity.
If Pocahontas/Mistress Rebecca Rolfe had not died while still in her twenties, what Thomas Jefferson told a group of Indians many years later might have come to pass: “You will mix with us by marriage,” he said, “your blood will run in our veins, and will spread with us over this great island.”