News traveled slowly across the Atlantic in the seventeenth century: crossings took 8 to 12 weeks or more depending on the weather. Keep that in mind. Sometimes it took longer.

For example,  think of the historic voyage from England to Virginia of the Susan Constant, Godspeed, and Discovery. three small vessels of 120 tons, 40, and 20 tons.  The smallest, Discovery, was 49 feet from bowsprit to stern with a beam width of 11 feet 4 inches, two masts, and an open deck. She may have carried 20 men. 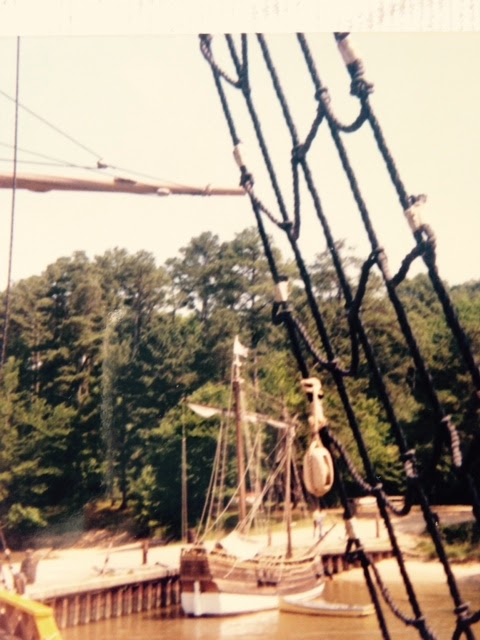 Here is a photo of the replica Discovery, taken from the bow of the  replica Susan Constant at their Jamestown moorings. Imagine weeks on the Atlantic in this tiny pinnace. For size, compare with the rowboat in the water off her port side.

On December 19, 1606, she and her larger sisters set sail down the Thames, bound for Virginia.

On April 26, 1607, after several stops on islands along the way, they finally stepped ashore on the land they called Virginia.

Three little ships, 104 men and boys, together at sea for 16 weeks.

Close quarters.
Posted by Virginia Bernhard at 11:17 AM