Another narrow escape for John Smith

On September 10, 1608, Ratcliffe’s term as president of the Virginia council was up. Who would be next? Of the original seven councilors, Newport was not now a Jamestown resident, Wingfield had been deposed, Gosnold had died, Kendall had been executed, and Martin was ailing. Gabriel Archer, Smith’s avowed enemy, and Matthew Scrivener, a newcomer who became Smith’s friend, were the councilors chosen to replace Gosnold and Kendall. When the vote was taken, Captain John Smith was elected president of the Virginia council.
Not everyone was pleased.
When Christopher Newport returned to Jamestown that same September, John Smith was not pleased.
Newport brought 70 more colonists, but as before, not enough food for them. Newport also brought orders from the profit-hungry, image-conscious Virginia Company: (1) hunt for gold,  (2) try again to find the Roanoke colonists (3) stage a coronation for the Indian king Powhatan, to make him a vassal of King James I. All this, when food was scarce, and the colony was depending on corn from the Indians. President Smith was furious.
Captain Newport and ex-president Ratcliffe hatched a scheme to get rid of Smith. They claimed he had gone on a food-trading expedition to Indian lands without asking their approval. On these trumped-up charges they wanted to depose him as president--and banish him from the fort. But Smith had friends as well as enemies at Jamestown, and the attempted coup failed. As one observer wrote of Newport and Ratcliffe, “their horns were too short.” 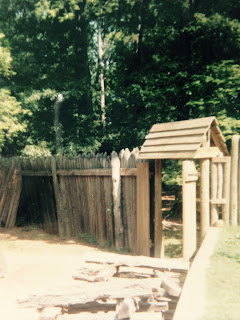 The palisade wall at Jamestown Fort: Enemies inside and out.
Posted by Virginia Bernhard at 7:38 AM